Miss Susanna Gale could have stepped out of the pages of a Georgette Heyer novel. Like many of Miss Heyer's heroines, she is young, beautiful and an heiress. When Reynolds painted this portrait of her in 1763, she was fourteen years old. Three years later, she was a widow.

Her full name was Susanna Hyde Gale, and she was the daughter of Francis Gale, a wealthy Jamaican plantation owner, and his wife, Susanna Hall. Susanna Gale's mother, the former Miss Hall of Hyde Hall, Jamaica, was an heiress in her own right, being the daughter of James Hall, who owned the only silver mine in Jamaica besides several other estates.
﻿ 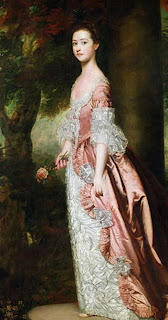 Reynolds painted Miss Gale's portrait in London, where she had travelled from Jamaica to complete her education. I presume she stayed with her mother's brother and his wife: her Uncle Cossley and Aunt Florence Hall, at their family home in fashionable Albemarle Street. She had five cousins: Rebecca, Elizabeth and Florence were about her own age but the two boys, William and John, were older.

The stay in a big London household would have been a totally new experience for Susanna, an only child. She was too young at 14 to "come out" in Society, but she would have been taken to the theatre and perhaps to private parties. Undoubtedly her aunt took her to some of the fashionable dressmakers and milliners of the day for ensembles like the pink one she is wearing in the painting. Money would not have been a problem!

We don't know how long she stayed in London, only that, after returning to Jamaica, she married Sabine Turner. I can find no trace of Sabine except that his Will was probated in Jamaica in 1766, when Susanna was 17 years old. They could not have been married for much more than a year when he died, if that. Perhaps he, too, was very young … he certainly had not had time to make his mark upon the world: that old gossip, Google, who usually has something to say about anybody who has the least claim to fame, only knows that he made a will.

Be that as it may, by 1769 Susanna had had three years to get over the loss of her first husband and she married 25-year-old Captain Alan Gardner, RN. This was a good move – the dashing captain certainly made his mark in the world. He had a meteoric career from Captain to Admiral and went on to become Commander-in-Chief of the Royal Navy in Jamaica. He was created the first Baron Gardner of Uttoxeter in 1806. He and Susanna, now Lady Gardner, had seven sons and a daughter: all of them fine, upstanding citizens who made advantageous marriages. One son followed in his father's footsteps by becoming an admiral and another had an illustrious career in the Royal Artillery. Three married into titled families. Miss Georgette Heyer, not to mention Miss Jane Austen, would have approved.

Lord Gardner died in 1809 at the age of 67, after an illustrious career. Lady Gardner, the former Miss Susanna Gale, outlived him by fourteen years and died in London at the age of 74.

I looked to see if I could find a picture of the present baron, thinking it would be interesting to see whether Susanna's descendant resembles her at all, but I found that the title died with Alan Legge Gardner, the 3rd Baron, in 1883. His family tree shows a son, Herbert Coulston Gardner, who outlived him and only died in 1921, so I was a bit flummoxed about why the Barony should have lapsed, until I discovered (courtesy of Gossip Google) that the third baron hadn't actually married Herbert's mother until two years after his birth, so Herbert and his two older sisters, Florence and Evelyn, were illegitimate. A bit harsh, I thought, that the Lord Chancellor or Black Rod or whoever wouldn't let poor old Herb inherit the title, just because his parents fetched up a bit late at the altar.

The stigma of the bend sinister didn’t seem to inhibit his sisters' marriage prospects, however. It helps to have pots of money! Florence married the Earl of Onslow and Evelyn married William Fuller-Maitland of Stansted Hall in Essex: no title, but a double-barreled surname and a Hall to live in doesn't sound like a mésalliance!

In fact, Herb himself came out of it quite well: he went to Harrow and Cambridge, became and MP and a Privy Councillor, married the Earl of Carnarvon's daughter and was created 1st Baron Burghclere of Walden in 1895. So yah boo and sucks to the Lord Chancellor and/or Black Rod.

By 1763, when Reynolds painted Susanna, he was in such demand that he fairly churned the portraits out, painting up to 150 sitters in one year, according to his notebooks. He required no more than three sittings: one sufficed for the face, and if it did not suit the subject's convenience to spend more time in sitting, then the rest of the portrait was finished using his servants and/or students as models.

He also streamlined his business by using the same settings and poses over again. In the case of Susanna Gale, he painted her in the same year as Mrs Thomas Riddell. He put them in much the same pose in a portico and against a nearly identical background. There are insignificant differences: for example, Mrs Riddell is holding a small basket of flowers, while Susanna is holding a rose, pink to match her gown.
The inspiration for both portraits was Anthony van Dyck's portrayal of the Marchesa Elena Grimaldi, a picture which Reynolds admired very much. Reynolds placed his sitters in a portico just as Van Dyck did, and they hold flowers as she does.

However, Reynolds' garden background is not as formal as the garden in Van Dyck's portrait - more of a landscape, which was the fashion with British portraitists at the time. As we saw in Rupert Bunny's portrait of Melba, the landscape setting enjoyed a bit of a resurgence during the Victorian era.

Next time you visit the NGV, drop in on fourteen-year-old Susanna, on the cusp of womanhood, looking serenely out of her frame with all the confidence of youth.

Here is a postscript to this article, in the form of an e-mail I received from Ann Farrington-Alt:
I'm an avid family genealogist and have been researching Susanna's first marriage to Sabine Turner. I wanted to commend Anna McClelland in her article that I read on your site. I was able, again thru Google, to find in an exerpt of the book 'The Records of the Honourable Society of Lincoln's Inn: Admissions Register: 1420-1893' the following information you might like to pass on to Anna. On May 9, 1757, Sabine Turner (gentleman) son of Robert T. Turner (late of Kingston, Jamaica) was admitted. In the National Archives online (under Documents Online) I was able to search for 'Robert Turner Kingston Jamaica' during the years 1700 to 1760 and found a 3 page lengthy Last Will and Testament to the tune of 710KB. It mentions Robert Turner being a merchant (probably very wealthy)...and that his Last Will and Testament was proved on 25 February 1756--the year before Sabine was accepted to Lincoln's Inn. I'm guessing that every wealthy merchant would want his son to become a leagal-eagle and know the laws..so my guess is that this was something planned by Robert for his son. How Sabine Turner died is another question that I have not been able to ascertain."Painting and Sculpture Before 1800" - NGV Publication
http://en.wikipedia.org/wiki/Alan_Gardner,_1st_Baron_Gardner
"A General and Heraldic Dictionary of the Peerrage and Baronetage of the British Empire" by John Burke, Esq
Posted by Catharine at 16:36

Thankyou so much. I saw this image at the NGV last week (I'm from Perth) and I've become obsessed with this young woman since then! I'm not sure what it is about the painting, but I honestly felt like she was the most interesting thing in the whole exhibit. Her eyes are so piercing, but a bit coy. I can feel the uncertainty, but also the self confidence (as almost all 14-year old girls have) behind her gaze.
Thanks again for the post!

I'm a descendant of Alan Gardner and Susannah Hyde Gale through their daughter Susannah Hall Gardner who married London banker John Cornwall. Their eldest son John Cornwall followed the family naval tradition, eventually becoming a rear-admiral on the retired list. Their second son was my ancestor, Alan Gardner Cornwall, the first of a line of clergy in six generations down to me.

An interesting artistic connection is that Lord Gardner's cousin, Joseph Farington was a Royal Academician and friend of Reynolds. Farington was also a prolific diarist, the diaries were published in the 1920s, and can now be found in digitised versions in the Internet Archive.

The story of the Gardner peerage is also even more interesting than you seem to have realised, with the de jure holder of the title almost certainly being one Julian Gardner, an Anglo-Indian still living in north India, as explained by William Dalrymple in this Guardian article https://www.theguardian.com/world/2003/dec/08/india.lords